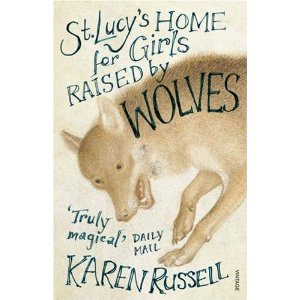 To say that someone was raised by wolves implies that they had little or no adult supervision growing up. In the nineties, we called them Latchkey Kids – literally meaning that after school unsupervised kids would have to let themselves in to the house with a spare key when there was no-one home. Being raised by wolves can have a profound effect on a person. You can develop a maturity not present in others your age, or seek parental nurturing elsewhere – in other adults, and more often than not, in older or more dominant children ready to steer you up the wrong path. It can also result in you having to learn some very hard lessons about life, much earlier than you need to.

Karen Russell’s St. Lucy’s Home for Girls Raised by Wolves is an anthology of ten stories about children left to fend for themselves in an imagined fantastical America of an almost childish imagining.

It’s an indulgent, magically escapist read with a shadowy realism that transports the reader into the lives of the unfortunates living between its pages. Each story is deliciously imaginative, but comes with a sting in the tail that often ends the story on a bitter note.

The novel was first recommended to me by a friend with an individual taste for off-beat and unconventional literature. But I only picked it up years after, while waiting to meet a friend in a bookstore. As a child raised by wolves myself, I was immediately drawn to the title, and after the first line I was hooked. Russell attacks her theme with an expert grasp of language and a flair for the fantastic. Its small wonder the author was picked as one of Granta’s best young American novelists and New York Magazine’s 25 people to watch under 25.