Review: Murder is as easy as clockwork 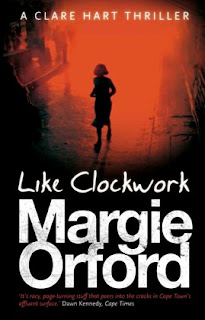 A review by Sally Partridge (writer)
Margie Orford's Like Clockwork is a gritty crime novel set in the Cape Town most tourists don't get to see: the underground.

A serial killer is murdering young girls and arranging their bodies publicly in grotesque poses meant to shock. The police call on the expertise of part-time profiler and journalist Dr Clare Hart, but she's already way ahead of them, and is about to crack the lid on a human trafficking ring that could be the answer to the whole mystery.

The book is structured like a cat and mouse chase, with Clare and her on-again-off-again squeeze Captain Riedwaan Faizal racing after a killer before he murders someone else. There's a also a juicy back story between the pair that's hinted at throughout the novel, as well as Clare's own mysterious past that is inextricably linked to the case. Ms Orford is a terrible tease. These tasty titbits are designed to make the reader reach for the next in the series to find out more.

The book delivers a glimpse into the inner workings of the local sex trade which is nothing like the glitzy billboards you see on national roads. Even the V&A Waterfront is shown to have a shady side, and whether its fact or fiction is anyone’s guess. It also offers a unique insight on the challenges faced by the South African police force on a daily basis which I’m sure will challenge many preconceptions.

Like Clockwork is definitely recommended as a holiday guilty-pleasure read, especially if you're in Cape Town and want to read more about the places you're seeing, whether a murder took place there or not.

2. It’s not overly gratuitous
Any fan of crime novels will know that serial killers do some nasty things to their female victims. Stieg Larsson’s The Girl with the Dragon Tattoo is testament to this fact. Orford's murders are just as violent, but they're not as grisly as the more established crime novels out there, which read like they’re extensions of the movie Saw.

3. Its like a tour of Cape Town
Like Clockwork is set in Cape Town and if you look past all the crime scenes and gangsters, there's some lovely descriptions of the Mother City. Look out for the V&A Waterfront, Sea Point Promenade and even Century City.

4. Because chicks rule
Dr Clare Hart is an awesome. She's a tough-as-nails hardened journalist and criminal profiler, but she's also sexy. She keeps her body toned with morning runs and never hesitates to show it off when the rugged Riedwaan is around.

5. It's the first of three
If you hate that depressed slump that comes after finishing a good book, fear not. Like Clockwork is only the first in a series of crime novels featuring Dr Clare Hart. When you're done with this one, get straight into Blood Rose and then Daddy's Girl.
Posted by Janine / Being Brazen at 3:47 PM

You should check out Field of Darkness by Cornelia Read. It's a mystery that I just read and it's wonderful!

Will endeavoour to read these books asap! Another good SA author is Deon Meyer who gives us an insight into the SAP view on our local crime. His books are easy to relate to because of his very accurate desciptions of Cape Town.